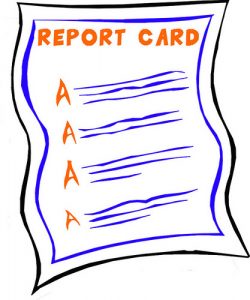 I’ve been interested in assessment and reporting from the start of my teacher trainging, and it’s been the biggest focus of my Professional Development as a teacher. In the past two years I’ve been involved in communicating student learning (CSL) working groups with my school district. One of the motivators for these working groups is to get our pedagogy and procedures in-line with the new curriculum. In this blog post I want to briefly discuss the intersection of CSL and pedagogy.

This post first started to perculate with me after some discussions with collegues on how they could incorporate some new methods for CSL. We had just finished a workshop give by Romy Cooper, and she gave us lots of fresh ideas and ways to think about reporting and grading. When talking about reporting and our classrooms with my collegue, it became clear to me that everyone needs to be able to clearly answer the question, “why should I change my practice?” It was surprising to me to that it’s not all that easy to answer this question.

Our current reporting structure is likely very familiar to anyone in Canada. It’s the typical report card that high school students receive three times a year. Each report card lists the students’ grade and work habit for each course they take. The grade is a percentage and the work habit is a rating (Excellent, Good, Satisfactory, Needs Improvement) along with a comment. The comments are often selected from a list provided to the teacher.

These report cards are actually quite good and effective in some ways. The percentage is supposed to be criteria referenced and show the student’s progress in learning for the course. The percentage does a good job in that it is easy to read. What it isn’t good at is describing student progress. Even though this percentage is supposed to be criteria referenced, it is actually acting as a surrogate for a norm referenced grade. We’ve been using this sytem for decades and everyone knows that 95% means you’re better than most, 80% is a bit above average, 70% is average and 60% is below average. When talking to parents about how they feel about our current report cards, most parents tell me that this is what they like the most. They want to look at the report card and see how their child is doing compared to everyone else. Parents also say they like to see improvement but mostly they want to know where their child fits within the bigger picture. People that have kids know how this works. It starts when the kids are babies and everyone starts to compare firsts: solid food, crawling, walking, reading, counting, you name it. “Just tell me that my kid is normal and OK.”

I find it ironic that our 100 point system does a good job of norm referencing and a really poor job of communicating learning. But I think we need to acknowledge that for a great number of parents, this is what they want. The kids themselves don’t need the norm referencing. They know how they fit in each class and are reminded of it with every activity and assessment.  I also find it funny that although the push is to report on student learning and progress, post-secondary institutions don’t care about this.  They want norm referenced data so they can rank and choose students for admissions.

The Work Habits on our report cards do an equally poor job of describing a child’s work habits. On task, off task, noisy, quiet, slow, fast, polite, shy, late, on-time, messy, neat, careful, careless, etc. I have no idea how these adverbs can be summerized as one letter, especially when they are constantly changing on a minute by minute or day by day scale. Most everyone is Good, and I don’t know what parents get from that. Like the percentage, the students should already have a pretty good idea of how they behave or how hard they work, so it’s not news to them. Well, I guess some kids aren’t super reflective but I think that is often a product of wishful thinking.

Back to my collegue. The question is why would he want to change how his report cards look or function. I think if we could incorporate a bigger, more detailed rubric for Work Habits, and have the students fill this in, our parents would get a much better idea of how their child behaves and focuses on school. In terms of grades though, I’m not sure it really matters. I would argue that a report card is not a good tool for summarizing criteria-referenced grades for each course, not because of the report card format but because summarizing a grade itself is pretty much useless. For those that use Standards Based Grading, you know exactly what I’m talking about. How you collect a bunch of metrics and then come up with an “average” disguises and masks the very information it claims to report on. An overall grade is steeped in biases and preferences. As far as a classroom grade goes, most are likely invalid markers of individual progress or learning, although on average for the class things probably work okay (and we’re back to norm referencing). There are two exceptions to this: kids that excel at everything and kids that struggle at everything. In these cases, a 95% and 55% do give a pretty good picture of how the student is doing.

The thing that really came through in talking with my collegue and listening to Romy’s presentation was that the report card is mostly unimportant. What IS important is what happens in the classroom. In Romy’s case, she outlined several methods which are aimed at improving student learning and giving authentic feedback. Her methods are things that come up in any discussion on good pedagogy:

After thinking about this, I’m starting to formulate how I would prefer to assess and communicate student learning. First of all, I should say that although I talk and blog about SBG, it plays just a small role in this whole process. The bulk of the assessing and communicating learning comes through careful lesson design which incorporates formative assessment on a minute by minute and day by day scale. From these learning activities I collect information that gets reported via SBG. When it comes to reporting, I like the idea of:

I would still need to provide an overall grade. I’ll probably design some fancy algorithm and a bit of black magic and come up with a number. If a parent reads through the work habits, looks at the performance task and reviews the standards based gradebook and still doesn’t know how their kid is doing, they probably will never understand. An overall grade would also be useful for parents that can’t be bothered to look at the specific evidence given.

The last statement above may seem cynical but that’s essentially where we’re at. I provide lots of assessment data to parents via sharing the students’ online gradebook. What the report card does is take this information and force us to compress the numbers smaller and smaller until we have only one number. I think digital photography has a good analogy to this, where we take photos that are super detailed and 80 MB in size, but strip and compress data so the photo is down to less than 2 MB so it can be sent via messaging.

So why should we change the way we report? So that it accurately reports on what we’re doing in our classrooms. General overall tests and assignments could be lumped into one general number. Progress on specific learning objectives can be reported on an individual LO basis. Large comprehensive performances should be reported in some type of detailed and descriptive way. Teachers can see where they are at on this spectrum and decide accordingly if they need to change how they report student learning.