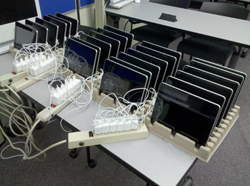 With the instant popularity of the iPad last year, tablets were finally thrust into the computing spotlight. People have been purchasing the iPad for many different purposes but it remains to be seen as to what tablets are really good at. Originally it was said that the iPad would be about media consumption, but this was idea has been eclipsed by the proliferation of IOS apps. Many educators have touted the iPad as being a useful part of classroom and online learning technologies, while I don’t necessarily share this enthusiasm.

There are three main reasons that I have some reservations on adopting the iPad in secondary school. I don’t think the iPad is cost effective, they may not be durable enough, and they severely lack in the ability to create content. The basis for my argument is that other types of computers such as netbooks and notebooks are far superior in these areas.

In terms of costs, netbooks can be purchased for ½ the price of the iPad. In today’s tough economy in education, surely this is a significant factor. Without considering any other factor, public schools would be able to double the classrooms that have 1:1 computers if they used netbooks instead of the iPad. I have also experienced first-hand how Apple upgrades their technology while older devices have their support dropped. For example, we have an iPhone 3G that was less than 2 years old and was unable to install the latest IOS apps being developed. As well, Apple had stopped making updates to its OS. Such a short life for software support can incur a large cost.

My question about iPad durability is purely anecdotal. I joke with other teachers, asking them if they have ever seen one of their students with an iPhone that doesn’t have a cracked screen. As far as I know, non-broken iPhones do not exist in secondary schools. I suppose there must be a few, but I would be pretty nervous deploying a set of iPads.

The biggest problem I have with the iPad has to do with its capabilities. For the most part the iPad is a device for media consumption including music, videos, books, and websites. Content creation is certainly possible but with severe limitations. Keypad input is not nearly accessible as on a PC (PC as in personal computer including netbooks, notebooks, macs, desktops, etc) and the ability to create rich media does not even come close to what a PC can do. Word processing, graphics, photos, videos, simulations, and many other aspects of computing are better suited to the PC. Free open-source software that I believe can play an important pedagogical role in the classroom includes: openoffice, geogabra, gimp, freehand, Sketch-Up and PhET java simulators are all important software pieces for secondary school. I have no reason to believe that the iPad has anything close to these offerings. I would be interested in hearing of iPad apps that have serious creation capabilities, especially free ones. I realize that “serious creation capabilities” is an open-ended term, as different people will have different definitions.

T.H.E. Journal has an excellent article on the pros and cons of the iPad: http://thejournal.com/articles/2010/06/01/enter-the-ipad-or-not.aspx. As the article points out, the iPad does have some very appealing aspects. Its intuitive interface makes the device feel very accessible. I don’t think that today’s secondary school students have any problems using standard PCs, but the draw of a small touchscreen device is desirable. For example, I can see how using an iPad would be good for something like web research. At the same time, I love how Firefox has a Zotero plug-in that manages citations. This is just another example of how I appreciate the more powerful features of a PC. As it stands, until I come across some clear examples of how the iPad is superior in its use in the classroom, I don’t think I would advocate for its use or purchase in the public school system for secondary schools.