Last week I started getting some pushback from the students in my Math 10 classes.  I have been running the classes in a flipped manner, where the lecture is replaced by activities and application/practice.  I’m sure the students are benefiting from the classroom environment, but it’s not completely obvious to them.  As I’ve seen in the past when doing problem based learning, older students don’t always like self-directed learning.  In the case of Math 10, I have students that want to be shown how to do something, along with seeing examples, before they even think about trying or struggling with the topic.

I’ve seen this behaviour many times before, in physics classes.  I’m also very aware of research such as Eric Mazur’s work with Peer Instruction, along with a plethora of theorizing on learning cycles such as 5e, GEM, Karplus, Driver-Oldham, etc.  I’m convinced that getting rid of the lecture or starting explanation is the right approach.  To further convince me that this is the best path forward, I came across some research from Peter Liljedahl today.

Liljedahl has looked into the “studenting” in the classroom.  Studenting is made up of gaming the system. This is where students use a variety of behaviours to avoid what we teachers really want them to do.  Studenting is made up of mimicking, cheating, stalling and faking.  I immediately recognized these behaviours because I had clearly identified them last year in physics…

Now Try This One

This is the scenario where the teacher gives an example in front of the class, shows how to solve it, and then gets the students to try one.  Some typical student reactions to this are stalling (going to the bathroom, sharpening a pencil, looking for a handout), avoidance (will work on it at home), mimicking (not really trying it, but waiting to copy down the answer). I saw mimicking as the most prevalent behaviour last year, where I’d guess over 1/2 the class would not try a sample question first, and wait for me to do it for them.  They knew that the teacher eventually gives the answer, and they have a great excuse for not trying it: “I don’t get it.”  By the end of the year I stopped going over examples, and I’m continuing this trend this year. 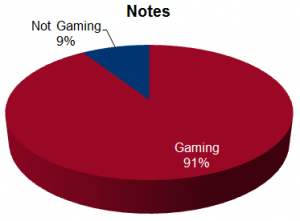 For the last two years I had been giving guided notes to my students.  The notes were mostly written out on the handout, and we went over them and the students filled in a few blanks.  Once again, by the end of last year I had become very disillusioned with this method.  It was clear that even with blanks it took a lot of time to go through them.  Usually at least 15 minutes.  Many times the notes were subsequently ignored by the students.  Liljedahl’s research shows even more stark data.  He found that only 50% of students completed notes (I guess guided notes are completed to a higher degree), and that only about 10% of the students use the notes.  I know that with my guided notes in physics they were used more than 10% but probably less than 50%.

In anticipation of teaching physics again this year, I had designed a method that would avoid the above problems. I was going to supply the notes via a Moodle website, and students would have to respond to a short 3 question quiz after reviewing the notes.  The quiz would ask 3 simple questions that did not test comprehension but would only check on whether the student had read the notes.  As well, I would include an open question, “What is one part from these notes that you’re confused about or would like help with?”  I planned on using this prompt for Just In Time Teaching (JITT). I never had a chance to try out this system but I’m reasonably confident it would work, and  it would save a lot of classtime. 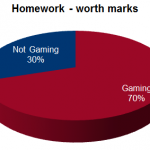 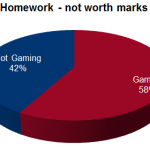 Liljedahl found that the majority of homework was being gamed, and contrary to popular belief, the gaming was worse when it was worth marks.  So if you are requiring homework and want it to be authentic, don’t attach marks to it. Since going over some of these findings with students, I still receive pushback. It gets a bit frustrating at times because in general, my students are doing quite well. When I have a student that is mastering all of the learning objectives yet thinks that I should be showcasing examples to make it easier for them, I cringe. The funny thing is that the pushback comes from grade 10 students, never from kids in grade 8. The 8’s are new to high school, and I think they are much more used to activity based learning.

An Example I’d Hope They Love

Today, for the start of a unit on roots and powers, we dug into the topic of irrational numbers. Rather than give a lecture on estimating irrationals, or diving into practice questions, I had the students dig into the irrationality of root 2. FWIW, I grabbed the topic right from Exeter, so I won’t lay claim to the activity. This activity was heavy in critical thinking and most of the class worked very hard on it. Only a few were successful in terms of getting an end result, but almost all groups made terrific progress in thinking about math. They did mathematical thinking without answering questions from a worksheet.

For the most part, I think the lesson went very well. I was dismayed that a few students immediately tuned out of the activity - they were waiting for direct instruction. I can’t really blame them though, I think years of heavily structured, teacher centric learning has an affect on them. So for my own learning, I need to get better at being patient with student behaviour as they adjust to new and different classroom environments.