My classes just finished doing a conservation of momentum lab. In many ways it was a big disappointment. We ended up spending 2-1/2 classes on the lab, with little to show for it. The general idea was to record position and time data from 6 videos (6 different types of collisions), calculate velocities and momentum, and compare total momentum before and after. There were lots of problems with this:

Point #1 above is particularly problematic. If ½ the groups or individuals make a mistake, it is unlikely that the students will recognize the conservation of momentum. 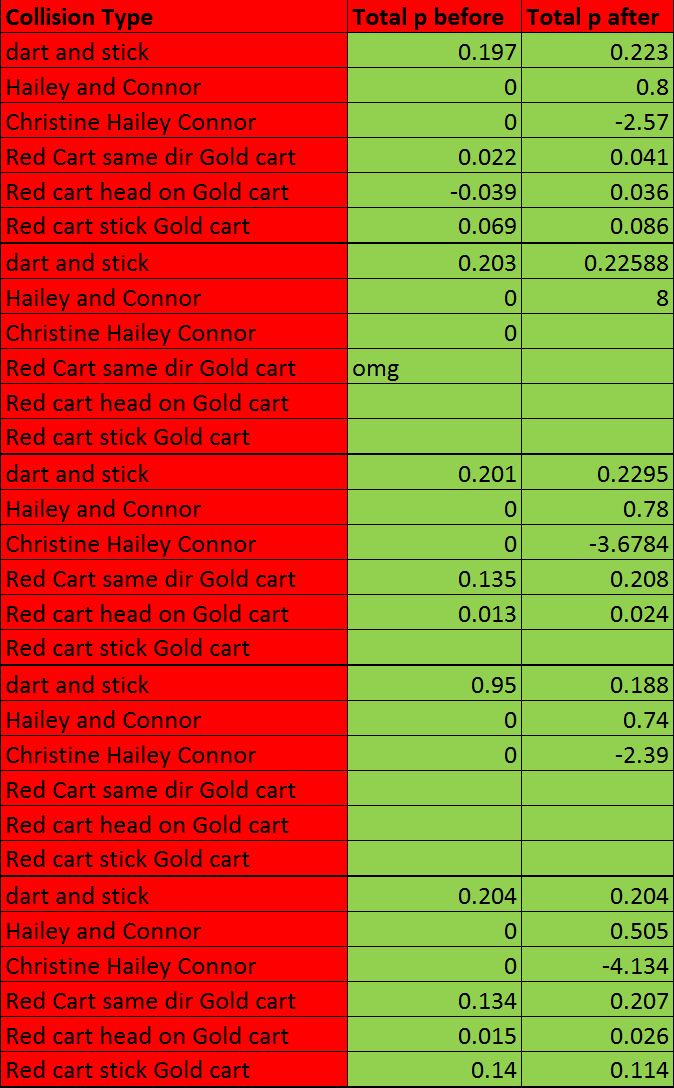 Point #3 isn’t particularly bad in the sense of me driving the bus, but that raises my main question in all of this. If I’m leading the discussion and pointing out the logic and reasoning, then what is really the point of the lab? There were a few small positives with the lab.

This lab really hits home for me in terms of using Modeling Instruction in physics. I have to ask myself if it’s all worth it. I could make two small improvements to this lab. First, I could have each group only do one video and one set of calculations, with their goal to be beyond meticulous. Then if they pool their data, hopefully the conservation of momentum would be claimed. Second, I can try to replace the videos where p = 0 (explosions). Ideally I would have probeware which would make the lab much more simple to implement. With probeware, graphing software would collect the data and graphe x-t and v-t graphs in real time and this would hopefully eliminate errors in analysis. It must be said that the original papers written about Modeling Instruction by Malcolm Wells explicitly state that computers and probeware are needed. I don’t see our school being able to purchase probeware any time in the near future. For what it’s worth, my co-worker sees great value in using smartphones and video to collect data in experiments, whereas I see data collection and analysis with phones as being slow and prone to error.

Even if I could make improvements I’m becoming very skeptical of the educational value in this lab, and other labs like it. They take a long time and the analysis is very hard to engage in a rich conversation afterwards. This part undoubtably has connections to cognitive load. The students are focusing and concentrating so much on writing data, calculating data, organizing data and sharing their work that many likely do not have any more working memory left for the real purpose of the lab. Looking at the paradigm labs from the Modeling Instruction resources, I think the same thing would happen for the Energy Transfer model. I’ve never been able to do Energy labs because of the lack of equipment. Furthermore, Newton’s 2nd Law always causes problems and I’m very skeptical of the modeling plan for its paradigm lab. The idea is that students are going to see that a∝F and a∝1/m, then realize that a=F/m. That would be a real stretch for any grade 11 student I’ve had for the past 6 years. Our grade 11 students don’t have explicit experience or instruction in inverse relations, and certainly no experience in combining proportional relations. The cognitive load required for a student to deal with the math could obscure the physics.

The part that really frustrates me is that BC has a new curriculum that it is rolling out, and many of the curricular competencies relate to things that students do in a Modeling Instruction paradigm experiment. Unfortunately there is at best a surface level acknowledgement of these competencies by teachers. How can a teacher take paradigm experiments and improve them with best practice through collaboration, if there is no real collaboration in the first place? This isn’t to diminish some of the great conversations I’ve had with colleagues, but we really don’t get enough of it, with enough people.

All of this leaves me with the idea of pulling back on the modeling instruction that I do in class. Perhaps John Hattie is correct:

I realize that I have not attended a Modeling Instruction workshop. However, I feel that I understand the modeling cycle and I’ve been practicing the concept of students building models through labs and constructive diaglogue and then deploying their models. I’m not sure that I’m seeing much real benefit from this though. The lack of equipment, time constraints, collaboration, and not enough recognition of cognitive load all work against Modeling Instruction here in BC.  Perhaps a modeling workshop would insert a few A-Ha! moments for me. Until then, I’m not sure what the best path forward is.