Research has long shown that fraction arithmetic is difficult for students.  We also now know that success when working with fractions is one of the best predictors for success in post-secondary education. With this in mind, one of my prime focuses in math 8 is to do the very best I can with teaching fractions to my students.

The research on fraction arithmetic tells us that by grade 8, students have a success rate of around 50% when adding fractions.  For some people in BC, this issue with fractional arithmetic is compounded by what they see as a weakness in the new BC Curriculum. In their minds, fraction arithmetic should start much earlier in the curriculum.  In BC we start working on equivalent fractions in grade 5, but we don’t do any addition, subtraction or division until grade 8.  The research on fractions and university success is used to convince people we should be starting earlier.  The argument that we are falling behind other countries in standardized tests (Singapore, Japan, China?) is also used.

While I completely agree with the issues mentioned in my first paragraph, I strongly disagree with the opinions that I mention in the paragraph preceding this one.

Those are three basic understandings that are either self-evident or at least easy to remember.  In terms of methods for adding fractions, we would simply use our existing skills and understandings (pre grade 8) and apply them to a new situation. I am very much against trying to have kids follow a prescribed algorithm because I believe it is unnecessary and evidently not successful. I used the word “prescribed” for a very deliberate reason. A basic intuitive approach to adding fractions based on two principles (numbers are easy to add, and fractions are easy to add when they have the same denominator) is the same as the algorithm, but presented in a conceptually understandable way.

The last piece in the puzzle for success in fraction arithmetic is taking advantage of some general teaching methods.  We should incorporate spaced practice (practice adding fractions over a period of time) and we should interleave the practice.

With the above ideas in place, I think it’s easily achievable to have well over 80% of a grade 8 math class correctly answer fractional arithmetic questions on pop quizzes.

The lesson starts with me tying a piece of string across the classroom.

“Mr. Smith, why are you putting up that string?” “I have some wet clothes to dry.”  Hey, days are long when you’re a teacher. Humour helps.

Everyone knows what a number line is, right?  Have a short discussion with your neighbour and come up with some properties of number lines.

Ok, ready?  I’ll pick people at random to tell me a property.

- they’re usually straight lines.  “Good! straightish is nice, but they can probably be curved too” (my clothesline is curved!).

- integers and numbers go on them

- you put dash lines on the number line.  “What do you know about the spacing of the dashes?”

- the dashes are evenly spaced

Alright, everyone now has to come up here and grab a piece of paper from my and a clip.  Now that you have your paper, you’ll see that everyone has a number. I want you to clip your number on the string.  You’ll have to work with your peers to figure out where your number should go.

Alright, let’s all look at the number line.  Does anyone see any mistakes? Is there anything we could improve?

<we always have some things to fix.  Typically there will be two numbers in the wrong spot and at least one spacing that is done more poorly>

Back your desks please.  Now take a look at these four numbers.  Talk with your neighbour and decide Which One Doesn’t Belong, and why it doesn’t belong. I’ll randomly pick someone to tell me what they think. 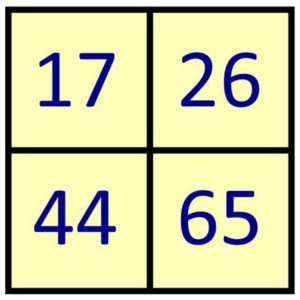 Ok, now let’s try a couple of ones with fractions

<I got these numbers from http://wodb.ca. The idea is to discuss properties of fractions, review.>

So you already practiced ordering fractions on a number line.  I know have a series of questions I’d like you to work on with the whiteboards.  I want you to identify which one is greater.

<Students moved through this pretty quick.  The interesting one was 3/8 or 4/10>

Take a look around the room.  It looks like most of you agree on your answers. There is one that is quite different though.  Which is it?

Who can explain why they think 3/8 is bigger?

Who can explain why they think 4/10 is bigger?

That sounds pretty convincing to me!  Ok, everyone needs to go back to their seats. What I want you to do is to write down one or two things that you learned today, or things that you had forgotten and now remember about fractions.