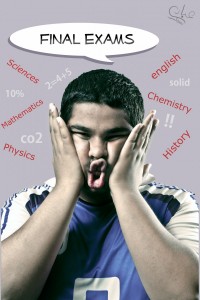 It’s that time of year again where the courses start to wind down. Which leads to the most anticipated question of the year. “Will there be a final exam?”  This can be a tricky question at the best of times.  For my grade 9 science students, it’s beyond tricky.

There are lots of arguments to be made about final exams. I don’t want to do a complete analysis of these arguments but I would like to say what I think the various pros and cons are. End of the Year Edit: at the bottom of this post I discuss what my decision was.

Reasons to not have an exam

Reasons to have an exam

For my grade 9 students this year, my decision on whether to administer an exam depends on three negative issues and two positive issues.  First on the negative side, I’m generally against the final for all the reasons listed above.  Secondly, my classes have an added problem of not actually having a science textbook.  While I don’t see textbooks as the holy grail in learning, I do recognize their value as reference material for a final exam.  My students have access to pdf files from the textbook, spread out over 27 separate files. It’s extremely unmanageable.  On top of this, many of my students don’t have computers but only have smartphones or they share a computer with 4 other people in their family. The third negative issue is that the format of exam I would administer doesn’t really mimic or model the “final exam” format of provincial exams or university exams.

On the positive side, I think it’s possible that going through the year-end review and prepping for an exam has value.  I really wish I had good data to guide me on just how worthwhile this exercise is though.  Secondly, I did see some interesting behaviours from students when they were told about the exam.  In particular, I saw one student that was becoming visibly agitated in class.  He started clenching his jaw, moving his head around and making noises. Later in class I asked him if he was feeling alright. He confirmed that the exam was making him anxious. But he also started asking direct questions on studying and how he can do good on the exam. He was quite clear that he wanted to do well.  This was a student that had significant issues staying focused in class all year, and not caring about grades too much.  The idea of an exam flipped a switch in him.

This will be a very difficult decision to make because I ultimately do not have the data or information needed. I don’t know if doing a pseudo-exam helps.  I don’t know if in-class reviews actually teach students how to review.

Perhaps some readers have ideas or answers to these questions?  I’d be interested in hearing your experience or rationale.

END OF THE YEAR EDIT:

I went with a year-end review package assignment (no final exam) and overall I think it worked out very well.  See my 180 day blog post on it for more information.