]One question that I’ve seen pop up again and again in science classes is, “what would happen to Earth if the Sun suddenly disappeared?”

I’ve had this question in science 9, science and technology, and in physics. I guess it’s one of those things that many people hypothesize on.  I was thinking about this today, along with the idea of Essential Questions driving classroom explorations and learning.  I wondered if we could use the following as the essential question for a unit on gravity in Physics 12

What would happen to the Earth’s movement if the Sun were to suddenly disappear?

Maybe this isn’t an essential question, and more of Hook Question.  There are two paths forward with this.  We can keep it as a Hook Question, or reframe the question so that it’s an Overarching Question:

How do orbiting objects affect each other’s motion?

Either way, we will want to derive smaller Essential/Topical Questions from it.  I would propose the following:

How do distance and mass affect gravity?

What role does gravity play in orbiting objects?

How does the force of gravity between two bodies affect their stored energy?

The above questions can definitely be improved, but they touch on the main topics we are interested in physics 12.  However, this isn’t really the point of this post. What I really want to do is come back to the original hook question that students seem to get interested in.

Starting with the original question of what happens to the Earth if the Sun disappeared, students could be directed to computers that are loaded with a program called the Universe Sandbox.  With this program, students could spend the rest of a class playing with planets and stars, adjusting masses and orbits, and can see what the simulator tells us about orbits and disappearing objects.

But how do we know that the computer program is accurate or realistic?  A ha, a new Essential Question:

At this point the students are introduced to a programming language, probably either Scratch or Python (using Vpython).  With these programs, students are guided through how to simulate simple motion using computer simulation.

The students are now ready to explain how the motion of two bodies can be iterated and simulated using a computer program.  Their next project is targeted to showing two or three bodies orbiting each other.  At this point the students are using formulas that explain gravity $F_{g} = \frac{G M_{1}M_{2}}{r^2}$ and should be considering energy at the same time.  As well, they are beginning to answer their Essential Questions.

Using their new knowledge, students are given a new project.  Can they simulate an object being launched from Earth?  What types of speeds are required such that the object a) falls to Earth, b) enters an orbit, and c) escapes the gravitational pull of Earth?

Can the students now extend their knowledge to test questions that are based on the work they’ve done?

Thinking back to how seniors approach grade 12, I’ve been interested in changing the order of topics in Physics 12.  Because of early admissions and university entrance, many students are disengaged and exhausted by the end of April.  This means that with our traditional schedule in BC, many students don’t focus on electricity and electromagnetism.  Typically the year starts with mechanics, which is a lot of re-hashing of kinematics, forces, energy and momentum, before moving on to electromagnetism.  Given that EM is previously unexplored by students in BC, it seems a shame to leave it to the end.  Instead, I’d like to start with a unit on gravity for three reasons.  First, the basic concept is a review for Physics 12 students.  Second, I think the above unit plan has the potential to truly engage students and see physics, science and school in general as something other than a march through a textbook.  Engagement is key, and using projects to explore the topic keeps us away from learning through a textbook - how many 17 year olds really are interested in the speed required to keep a satellite in orbit at 400km above the surface of the Earth?  The third reason for starting with gravity is that it serves as a useful and important analogy to electrostatic force, which would be the next topic covered (the first topic in EM). 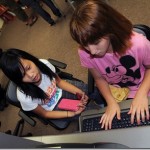 In order for this new approach to Gravity to come to fruition, a classroom would need the explicit and deliberate support from the school, school board and Ministry of Education.  This type of learning simply cannot be done without computers.  Mobile phones and tablets are completely unable to accomplish the tasks required and equity across the classroom is essential.

Can a new improved method of approaching gravity be done without financial support for computers?  Honestly, I don’t think so.  In my readings and research of PER (Physics Education Research), along with discussions with peers on best and new practices, it is rare that a new idea is developed that doesn’t require some type of purposeful and specific technology.  Usually this is a computer, but sometimes another device such as a high speed camera, probeware, or microcontrollers.  Very rarely does it include mobile phones or tablets, and when these devices are included in the discussion, their purpose is often an issue of convenience, not transformative pedagogy.

This is science.  Exploring and Learning through Doing and Creating.  Do your kid a favour, and buy them a notebook computer.