In my science 9 classes, we’re about to finish off a unit on Space.  As will all good unit planning, I had decided on an overall unit assessment months ago.  The general plan was to do another Concept Map test, sort of like I mentioned in another post: http://physicsoflearning.com/blog/assessment/107-assessment-checkpoint 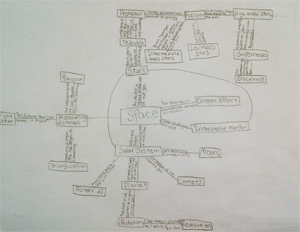 I’ve been working with the kids on concept mapping, and trying to follow a pattern of gradual release of responsibility.  For example, the first few concept maps we did together.  Then they did a concept map in groups.  This was followed by an assessment concept map, where I had an open-book test and the students had to make a concept map on the unit material.  Most recently I asked the students to create a concept map of the chapter we working on, and to hand it in before the quiz we were having next day.  I was pretty impressed with some of the concept maps created and many students expressed that it really helped them study.

For this unit, I’ve been playing with the idea of having a closed-book concept map but I give the students a massive list of keywords.  The idea here is that they shouldn’t be expected to have unprompted recall. However, while I think this would be a good step in terms of graduated release, I also think the activity would be too unstructured for some students.  A massive list of keywords could easily get overwhelming and confusing to kids.

My next idea was that I could set up the assessment in tiers.  Students could decide individually if they want to do an open book or closed book assessment.  However, if the students go open-book, the maximum mark they can achieve would be 85%.  If a student does it closed-book, they can get 100%.  This would be accomplished by setting up the assessment rubric with one category for “closed book.”  In some ways I really like this idea.  The keywords mitigate the need for outright memorization, while the closed book should bring students deeper into the analysis and synthesis realm because they need to work out the keyword connections through logic and reasoning.

I think that the closed-book concept map still might be too difficult for everyone but the brigthest students.  I could try it, but I’m not sure that a unit assessment is the right place for it.  My classrooms do not have high-stakes assessment but many kids still haven’t picked up on that (it turns out that you can’t just tell them not to worry…). 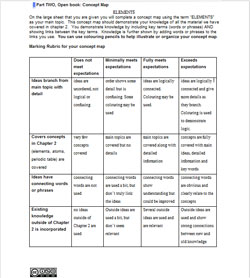 My plan for now is to do another open-book concept map, but this time I will create/modify my rubric such that links between keywords are strongly emphasized.  This is one of the strengths of concept mapping and I should try to exploit it. The challenge for me now is to come up with a rubric that reflects this.  Since the concept map is pretty wide open as a unit assessment, the rubric can’t have details such as “contains at least10 links.”  Much of the assessment of the concept maps will be subjective I think.  Sometimes this makes it difficult for students to understand what the goals and expectations are.

It should be an interesting process, and if anyone has some input into this topic or assessment of concept maps, or using concept maps for assessment, I would love to hear it.