Yesterday I had a pretty good night of viewing with my 6" newtonian telescope. I managed to see many galaxies including M51 (the Whirlpool Galaxy), M101, M106, M31 (the Andromeda Galaxy) and a cool look at the pair of M81 and M82. The Ring Nebula (M57) wasn’t very clear but the Dumbbell Nebula (M27) was decent. M13, the fantastic globular cluster in Hercules was easy to find in the NW, and I think the highlight of the night was the double cluster NGC869 and NGC884. 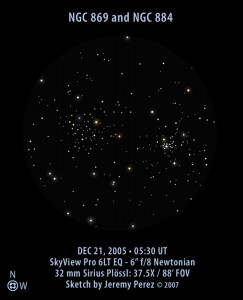 This was no doubt the most productive night of viewing I’ve had, with the reason being that I’ve gotten good at using my Telrad finder. Prior to this I used star hopping, which is difficult in light pollution areas, as well as using a “push-to” system. Push-to is a play on words with go-to. Go-to systems are electronic finder systems where a person keys in the desired coordinates of where they want to look, and the go-to moves the telescope there. With the push-to, I have a compass on the mount base and a protractor on the scope itself. I then look up the azimuth/altitude coordinates of what I want to see, and adjust the telescope accordingly. It works pretty good, but relies on real-time input of object coordinates and the mount base needs to be absolutely level.

Tonight I should have a good view of Jupiter from my back deck at around midnight, so I think I will check that out. I wonder what moons I will see?

I’ve often thought about the possibilities of starting an astronomy club at school but I don’t think it would be very practical. There are very few clear nights in the winter and spring and it would involve some late hours. If anyone has tried an astronomy club at their school, I would like to hear your thoughts.