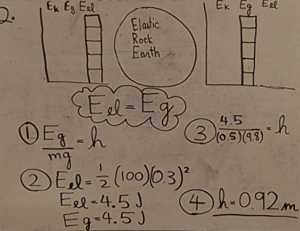 Lately I’ve been thinking a lot about Modeling Instruction (MI) and Cognitive Load Theory (CLT). I started this post a couple of weeks ago and then was further inspired by a post by Brian Frank (if you read both posts you’ll see some similarities). In my head I know that I want to compare them, but that is something that I shouldn’t really do because MI is a teaching and learning methodology while CLT is a theory about how people learn.  Apples and oranges. The reason I’m always trying to compare or think about these two is because CLT has a lot of research data to show its importance, and MI often involves methods that I believe are in opposition to CLT.

Most people don’t know much about MI, and I’ll briefly try to outline the basics here in this post. I apologize ahead of time if I get some of the ideas a bit wrong. MI is a methodology developed primarily by Malcolm Wells and some folks at Arizona State University going back to the mid 1980’s. It was originally developed for teaching introductory physics. I believe it came about from attempts to teach students a deeper understanding of physics, as opposed to more shallow textbook “problem solving”. The growth of MI is linked to the Force Concept Inventory, or FCI, which was developed by David Hestenes at ASU. The FCI is a conceptual test for understanding of Newtonian mechanics, and it is commonly used as evidence to show the success of working with MI. Experts in physics find the FCI to be quite easy and obvious. However, students do very poor on the FCI even after learning Newtonian mechanics. An easy example to demonstrate this is Newton’s Third Law, which states that interaction forces come in pairs, and these pairs are equal in size and acting in opposite directions. So if you and I were pushing on each other, the force I push on you is equal to the force that you push on me. However, when students are posed with the following problem, “A truck traveling at 50 km/h hits a mosquito. How does the force of the truck on the mosquito compare to the force of the mosquito on the truck?”, most students will say that the truck exerts a larger force on the mosquito, and this is incorrect (the correct answer is that the forces are the same size).

Recognizing a problem in student learning and using the mechanics baseline test as a guide, Wells developed MI to address shortcomings in physics education. From this, the modeling cycle was born. The modeling cycle starts with some inquiry and experimentation into an observed phenomena such as a buggy cart traveling at constant velocity. Students design experiments to describe the phenomena and then groups share their discoveries using whiteboards and whole-class discussions. From this, students develop models and different representations to describe their models. Finally, the models are deployed to new and different situations.  This includes applying the model to solve typical textbook questions.

I urge everyone that is reading this post to read A Modeling Method for high school physics instruction.  The paper is a bit long but very illuminating and interesting.  Much more information on MI can be found at the AMTA website.

I personally have been trying very hard to use MI in my classes for 5 years.  It’s a bit difficult because I’ve never been able to attend a workshop on MI, which is very important for understanding and honing how to teach using MI.  I believe that I’ve seen my students benefit from MI and it certainly gets the students more engaged in physics along with understanding the idea of what models are in science and how they are useful.  However, I believe my classes experience three main problems with using MI: there are always some basic ideas or concepts that the students continue to struggle with; it takes a longer amount of time to use MI; and to fully implement MI in a physics classroom, a significant amount of money is required.  It’s the first two points that I want to discuss in the rest of this post.

One important part of the video above is that our long term memory (System 2, aka “Gun” in the video) is crucial for allowing us to do all sorts of brain action with little to no effort.  CLT continues with saying that if a person is overloaded with information they will not be able to transfer the information from working memory to long term memory. In the case of the weight experiment I mentioned above, it could be that students were overloaded with information such as lab setup, graphing, an equation, new symbols, words, etc, and that the most critical parts of the experiment were lost in working memory.  CLT would likely advise to just tell students that $latex Fg=mg $ because this will allow for students to take this basic idea and transfer it to their long term memory. This comes down to that never-ending debate on explicit or direct instruction vs more discovery based or constructivist learning, which most people would probably consider MI to be a part of.

I strongly encourage everyone to watch the next video where Derek Muller (aka Veritasium) interviews John Sweller, one of the chief architects of CLT.  It’s a long-ish video running at around 25 minutes but it covers the main points of CLT and Sweller makes the case that fully guided instruction is the best way to learn for most students.  I personally really enjoyed watching this video.  The basic reasoning on why explicit instruction may be the best is simple: by getting rid of extraneous or confounding information, explicit instruction is the most efficient way to move information into long term memory.  For example, domain experts such as physicists have lots of knowledge in long term memory and have built up complex schema with this information, and this is what allows experts to devise and conduct experiments and do more advanced thinking.  It’s only through the acquisition of facts that a person can develop higher levels of thinking and understanding.

Whereas MI has students design and perform their own experiments and develop their own models through experimentation and exposition (dialogue and discussion), CLT says that we should use teaching practices such as explicit instruction and worked examples.  MI proponents point to FCI scores to show the success of MI.  I think this is a bit misleading, as the FCI is a test instrument designed to test what MI focuses on.  Even if I think the FCI is a bit misleading, I do value what the FCI tells us about learning in physics and I do think it is very valuable for students to be able to score as high as possible on the FCI.  CLT on the other hand can point to a large number of controlled experiments conducted over the years showing that in many situations students learn faster and better with worked examples and explicit instruction. While CLT test subjects are often measured using typical test questions, some research shows the benefits of CLT even when looking at knowledge transfer to inquiry tasks.

In a follow-up video to “The Science of Thinking”,  Veritasium posted the video below called “How Should We Teach Science?”  Surprisingly to me, in this video (especially starting at 4min) Derek seems to lean more towards the direct instruction camp, even saying that “students of science should not be made to do science, at least not in that complex of way and not too early.”

It’s pretty hard to argue against the theory of CLT and its experimental results, but there are a few key points to keep in mind.  First, CLT is a theory of learning and not teaching. For example, if your students are bored and not engaged in a class, they aren’t going to learn very much regardless of worked examples and full guidance. Second, CLT has shown to have an expert reversal effect, which means that students that already learn quickly may actually do worse in a class that is fully guided.

If nothing else, I believe that teachers should be aware of CLT and its implications.  Dylan Wiliam recently stated that he thinks CLT is the most important thing for teachers to know: 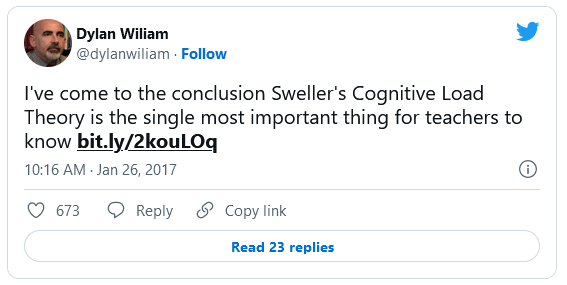 Wiliam has spent that last 20 years looking at the most effective ways to improve teaching and student outcomes.  If you read books of his such as Embedded Formative Assessment - practical strategies and Leadership for Teacher Learning, you should be convinced that Wiliam has something important to say on the matter. I rank Wiliam and Grant Wiggins as being the two biggest educational influences on me, and two of the most important writers and thinkers on education today, so when Wiliam says CLT is important, I think we should listen.

As I keep trying to improve my teaching, I am incorporating more and more the ideas of CLT.  I look for signs from students that they are getting overloaded, I’m starting to give explicit instruction on some key ideas prior to designing or conducting an experiment, and I’m giving out a few worked examples prior to deploying any practice problems.  This hasn’t stopped me from trying to use MI in the classroom. The one thing that my use of MI still does though is take a very long time. This could be the ultimate criticism from proponents of direct instruction. If my students learn the same or slightly more than if they were taught in a more traditional way, is it worth the extra time that it takes?  I believe that it does.

Research may show that transfer is no better in inquiry or constructivist models when compared to direct instruction, but I don’t believe this has been tested enough yet.  The rich discussions and model building we have in class surely are not wasted, especially if ideas can be further reinforced using the best cognitive practices that we know of (spaced practice, retrieval practice, deliberate practice).  For example, the labs we do early in the year may be heavily guided but within a month or two the students can accurately pick out dependent, independent and controlled variables.  In fact, this is probably close to what CLT would want us to do: guided instruction at first to get foundational knowledge in long term memory.  Teachers that prefer direct instruction based on CLT may prefer to not even do the first labs, and instead just tell the kids how they’re done. I don’t believe that student learning is so sensitive and teetering on failure that we can’t afford to give students more agency than basic instructions and examples.